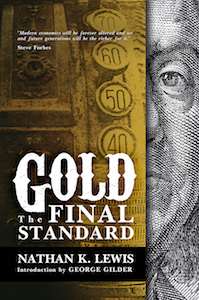 My thanks to Steve Forbes for a generous review in Forbes Magazine. Click here to read.

Gold: the Final Standard (2017) effectively forms a trilogy with Gold: the Once and Future Money (2007) and Gold: the Monetary Polaris (2013), between them describing the tools and concepts to understand money in all its forms. Here, the approach is historical: to document, in clear terms, humans’ experience with gold-based money, and various forms of debased, devalued and floating currencies, from prehistory to the present day — the Ancient World, Medieval Era, Bimetallic Era, Classical Gold Standard Period, Interwar Period, Bretton Woods, and today’s Floating Currency Era.  Along the way, a great many counterclaims are examined, in a manner that is necessarily brief, but, I hope, adequate to address the issues in an effective way.

Contriving hugely complex but still inadequate models and intricate statistical clouds of mythopoeic aggregates—giving each other Nobel prizes and other awards—economists laboriously try to explain what in Lewis’ gripping history of the last six thousand years emerges as just another episode of monetary manipulation and debauchery. “The primary innovation of the last century,” he observes, “has been to sprinkle spurious math upon these age old claims.”

from the introduction by George Gilder, author of The Scandal of Money (2016)

This profoundly important, impressively researched and fluidly written book explodes numerous myths and misunderstandings of the past and present that have led to so many destructive monetary policies. Modern economics will be forever altered, and we and future generations will be the richer for it.

Steve Forbes, author of Money: How the Destruction of the Dollar Threatens the World Economy, and What We Can Do About It (2014)

Gold: The Final Standard offers a magisterial overview of the history, and I hope, future of the gold standard. Meticulously researched and beautifully written, it should be mandatory reading for all students of the gold standard and especially its critics.

Nathan Lewis has a gift for distilling historical research and cogent analysis into pure monetary wisdom. In Gold: The Final Standard, he once again challenges the status quo by questioning the omniscience of central bankers and sustainability of fiat money. No one does a better job of explaining both the theory and reality of monetary arrangements, both domestically and internationally; no one else lays out so clearly the practical choices between automatic versus discretionary systems, or fixed versus floating exchange rates.

Scholars will find much to relish in this fact-laden chronicle, the third in a trilogy. So, too, will those who appreciate delving deeply into the fundamental issues that determine monetary integrity and viability – all presented in the form of a compelling narrative. Lewis has done a great service in producing a book that effectively makes the case for adopting a gold-anchored international monetary system to serve as the foundation for a pro-growth economic agenda.

Judy Shelton, author of Fixing the Dollar Now: Why U.S. Money Lost Its Integrity and How We Can Restore It (2011)

If, as Plato held, all knowledge is recollection, we have an extraordinary opportunity to learn what nearly every human society before our own has known: that money functions best when fixed to an external standard of value, namely gold. In a 5,000-year narrative that trips off the tongue, Nathan Lewis finds gold and its closest cognates associated with every economic and financial era of success in the history of the world, all the way to 1971. In our pitifully slow-growth twenty-first century, we now have a definitive accounting of the reasons we can feel confident in returning our money to gold. When at last we come to this wisdom of the ages, a tremendous prosperity that is the birthright of all peoples since the industrial and technological revolutions promises to bathe us anew.

Brian Domitrovic, co-author of JFK and the Reagan Revolution: A Secret History of American Prosperity (2016)

You can find out more about which cookies we are using or switch them off in settings.

This website uses cookies so that we can provide you with the best user experience possible. Cookie information is stored in your browser and performs functions such as recognizing you when you return to our website and helping our team to understand which sections of the website you find most interesting and useful.

You can adjust all of your cookie settings by navigating the tabs on the left hand side.

Strictly Necessary Cookie should be enabled at all times so that we can save your preferences for cookie settings.

If you disable this cookie, we will not be able to save your preferences. This means that every time you visit this website you will need to enable or disable cookies again.